The Cape Hinchinbrook Lighthouse served as a beacon to mark the entrance to Prince William Sound, and to warm mariners of the dangerous shallows nearby. Funds for construction of the site, 88 miles from Valdez, were appropriated in 1906and the station was completed in 1910. Earthquake damage in the late 1920s resulted in the lens’ original hexagonal lighthouse being replaced by sixty-seven foot tall art deco concrete structure completed in 1934. The lens was completed in 1934. In 1967 the lens was replaced by a two headed aero beacon, switching to full automation in 1974.

Ownership of the lens transferred from the United States Coast Guard to the State of Alaska in 1975. Alaska assigned ownership to the Alaska State Museum; the lens has been on long-term loan to the Valdez Museum since 1976.

This Fresnel lens (pronounced Fruhnel), named after the inventor is made of brass with 68 glass prisms and weighs a total of 1,600 pounds. Using an incandescent oil vapor lamp as its light source, the light had a candle power of 234,000 which could be seen for a distance of 22 miles. The lens rotated in a bed of mercury, producing a white flash every five seconds. 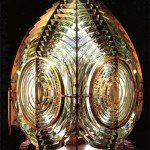