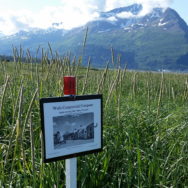 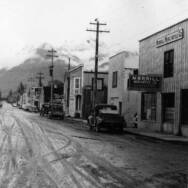 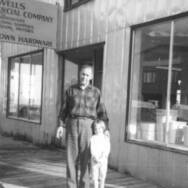 In 1952 Max Wells purchased and expanded the Merrill Mercantile Company. Sometimes, called the “Sears” of Valdez, Wells sold essentials from lumber to toys to washing machines on the ground floor. Old Towners recall him weighing new born Valdez babies in the nail scoop before the hospital was built, too.

Eight members of the Wells family resided on the second floor of the store and in a one-story section at the rear set aside for Grandma Wells. Max Wells yelled to the household to run to higher ground during the violent shaking of the 1964 Earthquake. He grabbed his young daughter Laura “like a sack of sugar.” Son Jason, picked up baby Teddy. Betty Wells navigated the chaotic streets of Old Town with her daughters supporting “grandma.” Fissures opened. Groundwater spewed upwards like geysers. Betty Wells looked back to discover a thirty-foot wave crest and fall just behind her. The family narrowly escaped.

In the aftermath of the earthquake, people fled to neighboring communities. Over 200 refugees traveled to Fairbanks, where they received temporary housing, clothing and medical attention.

Wells Commercial Company did not relocate to New Valdez.