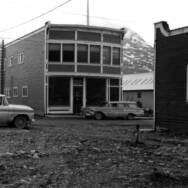 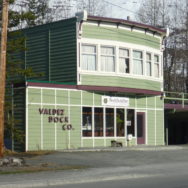 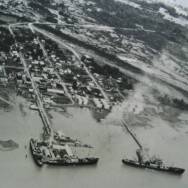 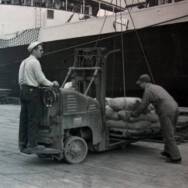 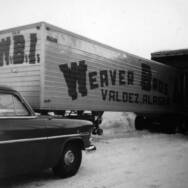 The second story bay window features prominently in this wooden structure. Originally built in 1914, it was destroyed in the July 15, 1915 fire that encompassed and leveled 50 buildings in the town. Rebuilt in 1916 to last thereafter, it relocated to new Valdez at 201 Hazelet Avenue.

The Kelsey family ran the dock company until 1989 and employed four to five hundred longshoremen after WWII. Shipping of freight and oil has always been important to the economy of Valdez.

The 10,000-ton cargo freighter S.S. Chena brought supplies to Valdez on Good Friday, March 27, 1964. Children and families gathered on the dock to meet the ship and catch candy and fruit thrown to them by shipmates. Tragically, these twenty-eight adults and children did not survive the earthquake that struck at 5:36 pm. A section of the coastline slid into the sea, taking the dock and people with it.

Destruction of portions of the Richardson Highway and loss of the city dock severely curtailed Old Town’s main industry, cargo transportation. Both the fishing industry and tourism were impaired, too. The damage to Valdez’s ports and harbors alone was estimated to cost about $3.6 million.