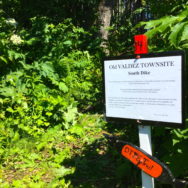 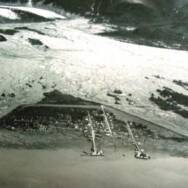 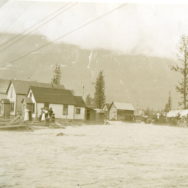 The dike, built in 1907 to keep the waters of Valdez Glacier from flooding Old Town each spring, ran four miles along the three inland sides of town.

Old Town Valdez could also be deluged by the sudden release of entire ice-dammed glacial lakes associated with the Valdez Glacier.  The perilous nature of the spring flooding was noted as early as 1899 by Edward Gillete, an engineer in Army Captain Abercrombie’s survey party. The glacier receded nearly one mile during the decades between Capt. Abercrombie’s report and the 1960s. Glacial runoff, though lessened, continued to hazard the town, challenging the dike system.