As far as we know, the area around Valdez was never permanently inhabited before the founding of the town by white settlers, although Natives did use the land for hunting and fishing. However, the area of Valdez’s broader “neighborhood” — Prince William Sound and the Copper River Basin — has been occupied by several different cultures:

In modern times, Valdez has been the home to both Natives and non-Natives, including Native Alaskans originally from outside the Valdez region. People from all over the state and beyond now make Valdez their home.

In 2007, the Valdez Museum opened up a portion of its space to dedicate a 600 square-foot Alaska Native Gallery, for the interpretation of the history and culture of the Natives of Prince William Sound and the Copper River Basin. The gallery includes both permanent and changing exhibitions, and displays both antiquities and contemporary Alaska Native artworks along with a dynamic educational program about facets of Alaska Native life. 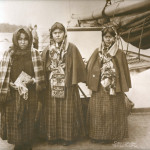