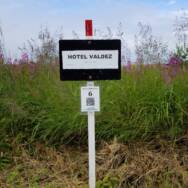 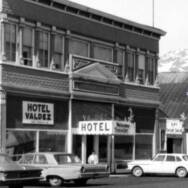 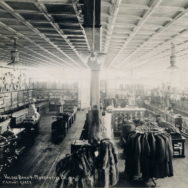 Constructed in 1907 as a general store, then converted into a hotel in 1940, this two story brick building was located at 419 McKinley Street. When a fire broke out in the late 40s, it was used by Gilson Mercantile temporarily as a grocery store, then returned to use as a hotel in 1963.

Legate’s Taxi Service, a one story concrete block addition on the south side of the building constructed using neither grout nor rebar supports, didn’t fare well in the 1964 Earthquake. The quake caused a submerged landslide along the shoreline that displaced considerable water and brought about a local tsunami and series of four successive waves. These bounced off the opposite end of the bay like water sloshing in a bathtub, and flowed into Valdez.

Floodwaters rose up to six feet along McKinley Street. High tides reached a third of the way into town. Land masses dropped nine feet and shifted sideways. Silt deposited in and around buildings. Two and a half feet of water flooded the gift shop in the Hotel Valdez. The structure did not relocate to the new town site.