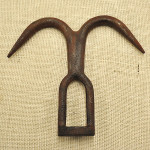 This recent acquisition from Valdez resident Todd Beck is a fascinating yet morbid piece of Valdez history: a cadaver hook! The hook was originally manufactured for Chicago Stock Yard beef, but re-purposed for the storage of human corpses.

The use of the hook dates to Valdez’s first couple of decades. During the cold winter months, the ground was too frozen to dig graves for those who passed away. A common solution was to send bodies of the deceased to the Lower 48 for interment. But another solution, not for the squeamish, was to place the cadavers literally in cold storage until the ground thawed. The hook would have originally hung on a spinner, which is now missing from the item.

Beck, a history aficionado and collector of Valdez memorabilia, states, “The way it was explained to me was, the ice locker and cadaver hooks where a closely guarded secret of Old Town. The city didn’t have the steam technology to dig graves in the winter months. But Valdez was trying to grow. So they hid the bodies on ice in a cooler in the old morgue in the winter months.” Valdez’s morgue was located in what would later become the Morgue Bar, from which the saloon got its name; prior to its use as a morgue, the building had been used as a stamp mill. Beck noted the irony that Copper Center, now a much smaller community than Valdez, at the time did not have the same problem due to the quantity of steam-powered mining equipment in the region.

According to Beck, a thirty-year resident, he discovered the hook as a child, and its provenance was explained to him by the director of the Valdez Museum. The hook was one of three used at the old morgue; the second one was lost among the wreckage of the 1964 Good Friday Earthquake, and the whereabouts of the third are unknown. It is believed that the museum formerly had the missing hook in its collection but the item was lost during one of the museum’s numerous collection moves before it held a permanent display space.